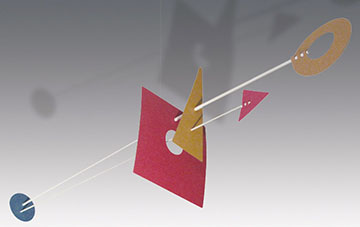 JOAN PEDRAGOSA, SCULPTURES IN THE SPACE

Starting on July 20, you can see the temporary exhibition "Joan Pedragosa, sculptures in the space" at the Open Hall of the Toy's Museum, in Figueras.

Joan Pedragosa and DomÃ¨nech (1930-2005) was a renowned graphic designer and sculptor. Member of the generation of the pioneers of modern graphic design in Catalonia, in 1961 he founded, together with other designers, the Association of Grafistes of the Promotion of Decorative Arts (FAD). He was a member of AGI (International Graphic Alliance) and professor of publicity at the Massana School from the 1965-1966 academic year.

Recognized, fundamentally, for his advertising work, some of which have become classics of design, Pedragosa cultivated many facets. He stood out as a poster designer, with the innovative poster for the Barcelona Exhibition Fair of 1960, the IV Joan MirÃ³ Drawing Award of 1965 or the V Barcelona International Music Festival of 1968, to mention just a few examples. It also did so in the design of logos and trademarks, some of which, like the Fogo logo or that of the PolÃ­grafa publishing house, have become iconic. Likewise, he worked as a designer of the monographs of PolÃ­grafa artists, album artists and promotional elements, among others, and as a creator of fonts such as the Galaxy, from 1964. Together with Gallardo, Giralt-Miracle and Pla Narbona, He participated in the exhibition 4 GrÃ¡ficos a Sala Gaspar (1965), the first exhibition of graphic design in an art gallery in Spain.

Formed in Barcelona, Pedragosa worked in several advertising agencies in the city and in Switzerland, where he lived for some years. Marked by pure geometrical formalism, he was also interested in Russian Constructivism and Italian Futurism.

From the mid-1960s, Pedragosa began to develop three-dimensional designs in the form of corporeal articulatable structures: Christmas carols, invitations, promotional elements, targetons, etc. From the decade that followed, these creations gradually became detached from their role as graphic designers, until they became an autonomous artistic activity. This activity began with mobile phones and continued, starting in 1986, with small-format sculptures (desktop sculptures, according to their name), until in 1993 Pedragosa began to create large-format sculptures.

This exhibition shows a selection of three-dimensional creations by Joan Pedragosa, focused on its mobile production and accompanied by small format sculptures and promotional elements. Likewise, he includes some of his best work as a graphic designer. The exhibition aims to publicize one of the lesser-known facets of the designer, as a continuation of the exhibition held in 2006 at the Badalona Museum and the exhibition on his graphic work that took place at the Biblioteca de CataluÃ±a in 2010, where deposited all the designer's documentation.