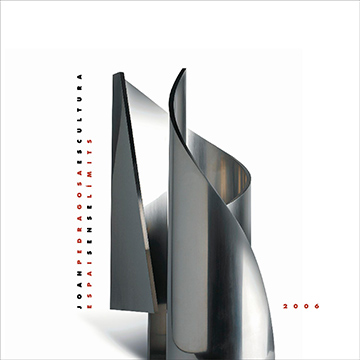 Fragment of the text published in the catalogue 'Space without limits' 2006, Badalona

Between 1947 and 1950 in Badalona, and by the hand of the technologist Pere Casajoana, Joan Pedragosa was introduced into line drawing and industrial aesthetics, in classes which improved his natural inclination to geometry, that is to say, for that part of mathematics which is based on the intuition of space, and these definitively directed his profession-vocation, although before arriving at pure sculpture he went through a long process of plastic creation, in the overtones of which there was always geometry.

From 1955 he worked in various graphic studios in Barcelona, where he did his apprenticeship as designer. In 1961 he contributed to the foundation of Grafistes AgrupaciÃ FAD and in 1962 set up his own studio in the Carrer Tuset, where there were many advertising agencies and which caused a renovation of the graphic image of our culture.

First, however, he had been in Switzerland, specifically for the Conseil de PublicitÃ Ralph M. Chavannes, in Lausanne, where he led the Graphic Creation department. And it was not by chance that Pedragosa chose that country, where at that time the most radical school in the use of geometrical parameters applied to graphics was to be found.

Typography, illustration, photography, trade marks, posters... all were subjected to a rigorous process of diagramming even more strict than that proposed by Bauhaus. In fact, the motto of this school Ã±which was led by Max Bill, Josef MÂ¸ller Brockmann, Richard Paul Lohse and Emil Ruder- was the defence of Ã¬concrete artÃ®, which according to Camille Graeser represented Ã¬building and developing rhythms on geometrical foundationsÃ® and the Ã¬strictly logical creation and configuration of works of artÃ®, so that for them Ã¬concreteÃ® was a synonym for Ã¬purity, rule and order.

In other words, in Switzerland, Pedragosa found some twin souls, who had the same concerns and worked like him. The result was that his innate predisposition for arranging words and images in an orderly way on flat surfaces was implemented to the point that, on his return to Barcelona, he developed his own graphic world on these guidelines. And it was precisely this capacity for the geometrical understanding of space which made Joan Perucho, in 1966, define him as a Ã¬rigorous and scientific graphic artistÃ®, probably the one of his generation who most embodied this principle. Installed, then, in his studio in Carrer Tuset, he enjoyed some years of great professional activity and tremendous public projection: he collaborated in the organisation of exhibitions, the creation of year books, he started magazines, supported and involved himself in the teaching of design, strengthened his contacts with international associations and achieved all this without ceasing to design: trade marks, labels, adverts, leaflets, books, magazine covers, posters, packaging, etc., which remain for ever more in our subconscious and in which even today we can see the Swiss imprint.

We only need to recall his logos (for Fogo insecticide or for the Costa Brava, or the current one for the Rosa Bisbe gallery), his posters (for the Barcelona Trade Fair in 1960, the Barcelona Boat Show in 1964, the 4th Joan MirÃ prize for drawing in 1965 or the impressive Viva Agi in 1971), his illustrations (particularly those related with the series Ã¬Tempore fugitÃ®), his alphabets (Galaxy, the most symbolic) and the page layout he did for books (such as the Hispanic Art Collection for La PolÃgrafa).